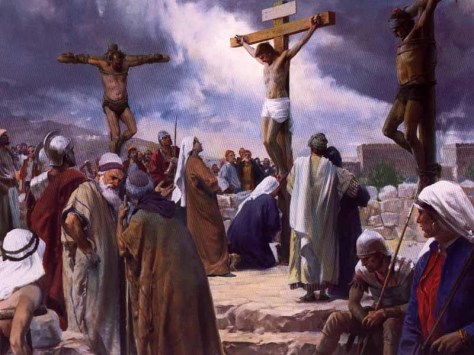 Today’s Bible reading and an excerpt from it

Truly I say to you, today you will be with me in Paradise.

We have begun to pray using the statements Jesus spoke while he hung dying on the cross. The seven different statements he spoke provide us with not only perspective of his experience in that moment and his rationale for why he had come to earth but also offer us purpose for how we can experience life and even give us the rationale for why we are on earth. Jesus came to give us life – life abundantly. His first statement, which we likewise prayed yesterday, requested God’s forgiveness for our arrogance and ignorance us from experiencing vitality and oneness with our Maker. Jesus’ second statement on the cross is a declaration of that connection and its infinite reality, not just as a possibility but as a palpable actuality.

Jesus was executed as a criminal for claiming to be king and the anointed Messiah. He was placed among other convicted criminals (who could have been sentenced to death for any number of crimes, ranging from petty theft to murder). The punishment of death in Roman times was a sadistic public spectacle. Such display of ‘this is what you get for screwing up’ was as much a warning to all who passed by to mind their Ps and Qs (or else) as well as an excuse to openly ridicule someone else for getting what they deserve (an underhanded way of making the spectator feel more superior and righteous). According to the Gospel account, the scene that surrounded Jesus’ second statement involved ridiculous taunts from the other criminals towards one another as well as from the onlookers. A criminal hanging next to him “hurled insults at him’ (Luke 23:39) that not only doubted and even denied Jesus’ true identity but did the same for our identity as well. However, another criminal hanging on the other side of Jesus chimed in with the proposed truth about who Jesus was and who we are/who we can be.

This provocative scene plays out as one may see internal tensions depicted with a devil on one shoulder and an angel on the other. Each side making statements about identity – what to believe about ourselves and God. The irony of the tension Jesus was caught between was that neither side were “angels”. However, only one of the two criminals accepted his true identity of needing salvation and acknowledging the true identity of Jesus as being Savior. It is vital to note in this scene that Jesus does not respond to the taunts of the insulting criminal but directly responds to the one who requests a relationship founded on compassion. “Remember me when you come into your kingdom”, the criminal asks with dying breaths (Luke 23:42). Though Jesus hung dying, too, this man believe that Jesus was indeed king and a kingdom was still possible. For that belief and for his request, Jesus gave him eternal life and not just a memory of connection but the actual reality of it. That was the reason Jesus was dying, after all – to eliminate death’s sentence and condemnation of life.

Do you experience hearing those same voices Jesus heard – telling you either that your life is a joke or that your life has value and eternal meaning. Remember how Jesus responded in such moment of tension. Use Jesus’ words to remind yourself of who you really are and how Jesus is relating to you.